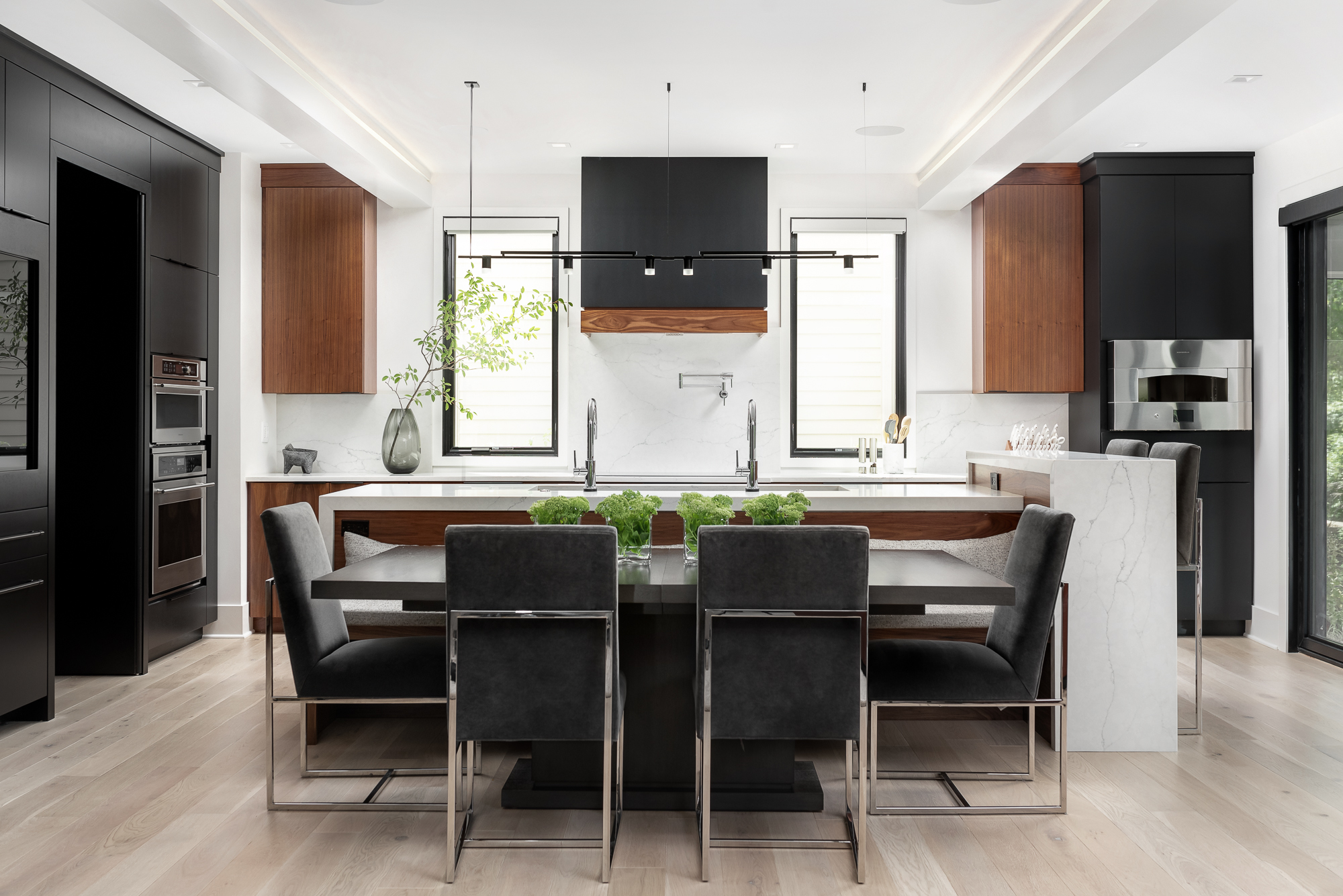 Posted at 00:00h in General by Lauren Collander

Want to know our designer tips to turn a dated suburban house into a modern luxury home?

Here we will tell you a few of the most impactful changes we did in a recent renovation that completely transformed this house from the early 2000s.

Opening Up the Floor Plan

The home had a decent floor plan and already had a large great room connected with the kitchen.

We did make one major change, however, and that was eliminating the formal dining room.

The dining room was rarely used by the homeowners, like most Americans, and the kitchen was feeling a little tight when entertaining.

If you’re more into cooking and hanging out in the kitchen and less into formal dining, this could be a great option for you. 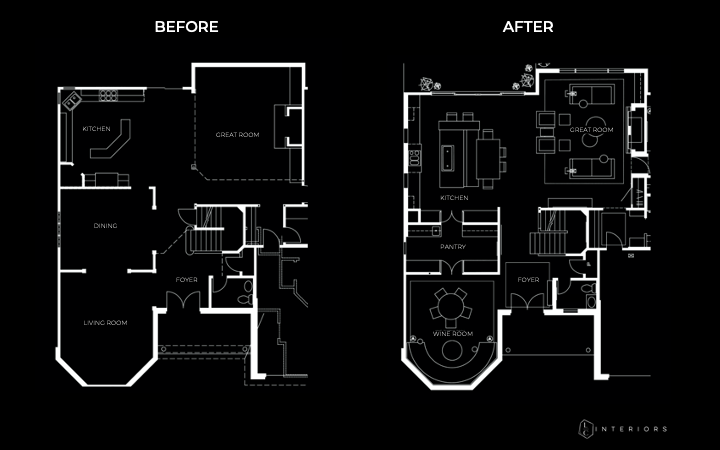 Before: The kitchen and dining room are about the same size.

After: The dining room was eliminated to expand the kitchen and add a walk-in pantry.

We Ran into a Problem

Opening up this space wasn’t an easy task as we soon discovered that the wall to be knocked down had a structural beam hiding inside. *uh oh*

Since the point of this renovation was to create a larger, more open kitchen, we took the plunge and added a horizontal I-beam to the ceiling to replace the vertical support that would have interrupted the open space.

This created an opportunity to turn the ceiling into a bit of a feature, and we added two more faux beams with soft up-lighting.

Ceiling beams create a feature in this kitchen.

Dining space was added back into the kitchen which we will get to next.

After eliminating a dining room, you will still most likely need a large dining table for family dinners, projects, etc.

Instead of having the dining area separated from the main living space, it is now included in the expanded kitchen.

It has all the entertaining and dining space you could want. 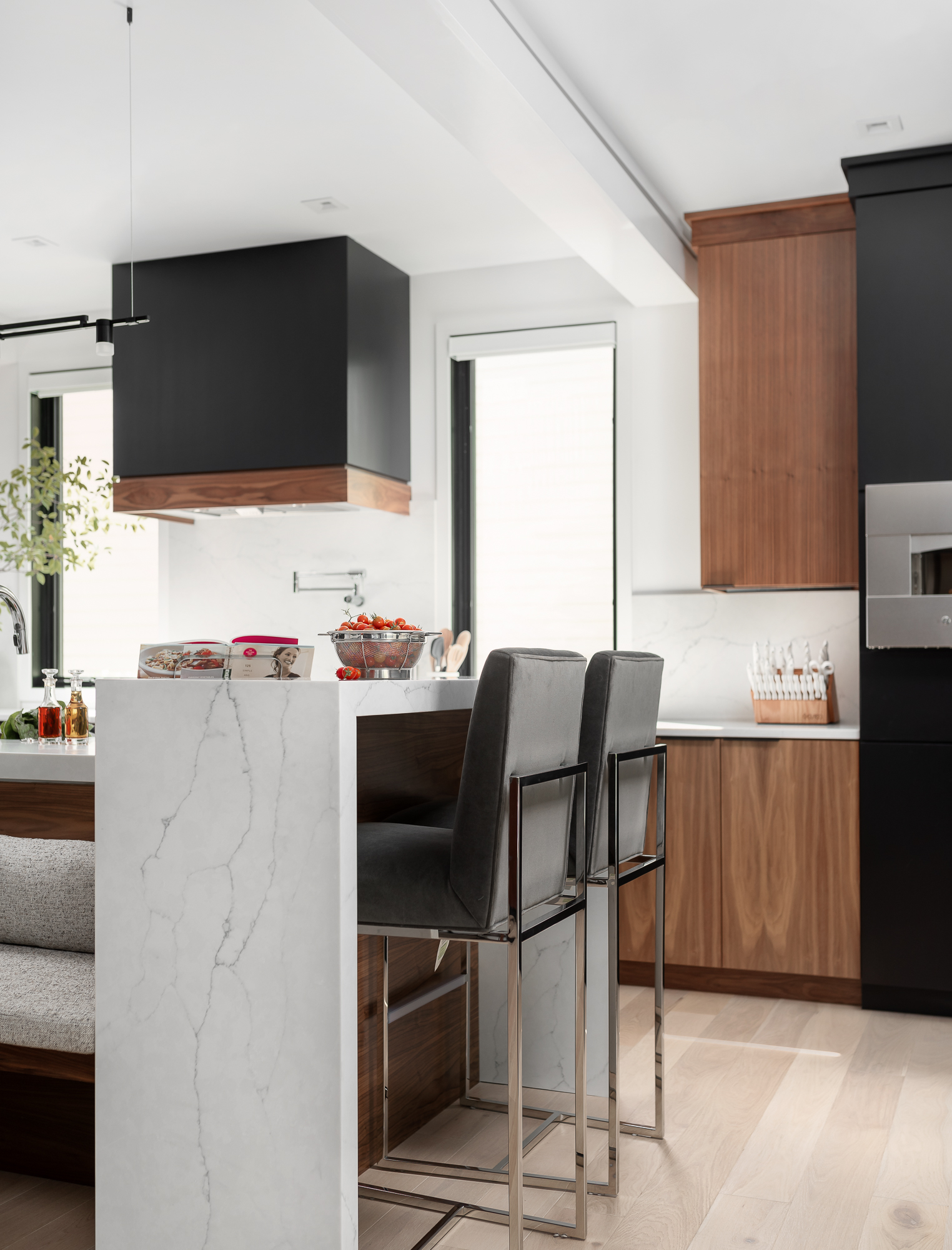 We love that lots of guests can be in this space connecting with each other while sharing a meal, snacks, and/or drinks.

All the smaller architectural details got an overhaul as well. 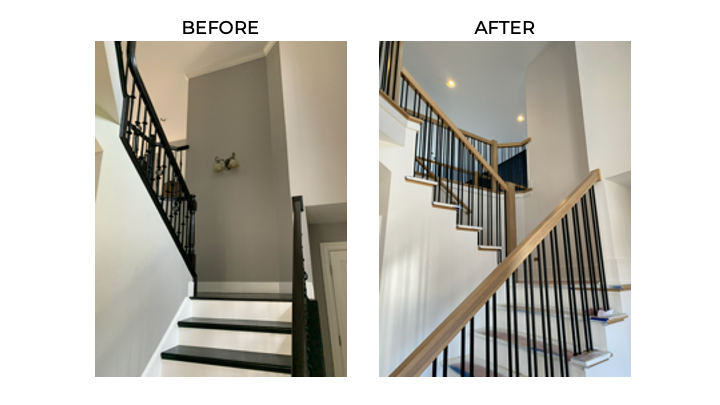 The floor plan as well as smaller architectural changes completely transformed a dated suburban house into a modern luxury home.

Would you or have you done any of these changes to your home? Let us know below!

Check out all the photos of the Luxe Modern in the Burbs renovation.

Soon we will have separate blog posts on the kitchen and the great room transformations, so stay tuned for those! 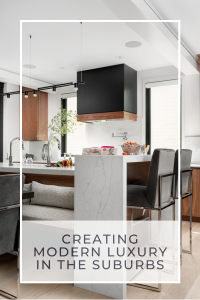